About Knust
12 - Juni '20
door Lola Bezemer & Can Oktik
In a short working period of one week, 11-17 May 2020, Lola Bezemer and Can Oktik worked together from their home in Extrapool's online residency.
Extrapool asked Lola and Can about their experiences.

How was it for you to do this online residency?

Lola: It was a very good experience. It was the first time I collaborated with Can on a project that we created and developed together. Also it was my first online residency. I’ve done Instagram takeovers before, but this residency brought a very different approach to using the platform, looking at it more as an exhibition space. Extrapool gave us a lot of freedom to experiment with our project and their input during our meetings was helpful in making our plan more concrete. The time frame of a week was on the one hand perfect for such a first time collaboration and on the other hand very short. We were very enthusiastic about our idea and didn’t want to compromise it too much, so we ended up working till late in the night, and the last day of the residency we didn’t sleep at all! Yet, it was all worth it: we had a lot of fun working together and I think we also both work well under the pressure of a specific time frame.

Can: I thoroughly enjoyed it! I think that being in the comfort of our own home/studio made the process go smoother, though it did mean that there was no off button. Some days we were working on the project for over 17-18 hours a day. For me it was an immensely rewarding experience and it was worth every hour of sleep I missed. It was also the first project we completed as a couple and I believe we are both excited to try collaborating again. I’m very thankful to Extrapool for giving us this fantastic opportunity to work together. 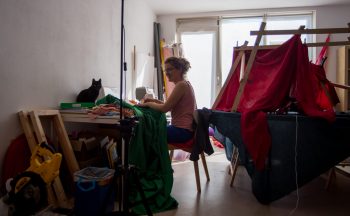 Can you tell a bit about the project you have been making during that week?

Lola: Being at home a lot made us think about other kinds of living spaces and how we relate to them. We envisioned creating spaces that fully surround us without any daylight coming in, closed off from the outside world, like burrows, caves and bunkers. We built those spaces in an abstract way out of materials we have in the house: textiles from my earlier projects, lamps, handmade ceramics, pieces of trash, etc. Then we created a choreography for the actions and camera movement. For the first video this involved quite a few actions and specific timings that were complex to realize with just the two of us, and it took us more than a day to get the right take. After that first video we had to make the choreographies simpler.

The project consists of seven videos and two images that together form a grid of nine posts on Instagram. The viewer travels through different spaces, which we called Habitats. They are home to different characters, for which we put together costumes and then I performed in front of the green screen. Later we edited these together and made soundscapes for the videos. They are mostly sounds we collected in and outside the house as well as voice recordings and some musical instruments, like a kalimba and a harmonica. We wanted separate and visually distinct transition videos between the Habitats. For these we pushed the camera through our cat’s play tunnel that was full of obstacles, like sticks, textiles and pieces of trash.

Can: The project was, among many things, an experiment in co-creation and time management. Our initial idea was conceived without really considering the time restrictions in place, but after learning that the residency was only a week long we decided to go ahead with it anyway. We were agreed that the work would have architectural and performative elements to it, but the aesthetics of our idea were constantly changing based on the equipment and resources we already had at home. We chose not to create any new building materials and used Lola’s old works, alongside objects and materials we already had in our house. We spent much of our time trying to figure out the technicalities of editing, keying and rendering codecs, which we were not wholly familiar with.

We decided to use Instagram as our main platform, hoping to use the grid structure of the site in a fun way to present our ideas. It turned out that Instagram wasn’t actually ideal for video presentation, problems with how video files are compressed on Instagram and how IGTV is integrated within Instagram video posts turned out to carry with it unforeseen obstacles.

The piece itself was imagined as a journey through an unfamiliar habitat, a brief look into alternate living spaces, with the rules and relationships we have in our own habitats warped and reformed but also paralleled and somehow retaining familiarity. The end product was the result of these ideas and the reality of our resources meeting. Although our idea was initially planned out as much as possible, the works ended up being very improvised with the creation process moving forward with almost no pauses. It was a bit like a week-long break-neck bicycle ride down a winding mountain road with no brakes! Exhilarating and exhausting! 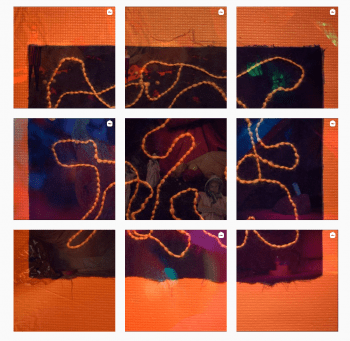 How does the home and quarantine environment affect your creative process and work process?

Can: The home environment has a lot of benefits, more so in my opinion than the drawbacks. Not being worried about being kicked out of a space when things take longer than intended (which is more often than not), is a great comfort. But it can mean that you’re always at work with no escape, and I can see that potentially being problematic when the end is further away than a week. I believe that we also discovered that we work well together, which we also sort of knew but we’d never collaborated in this type of context before, so all-in-all it was a very positive experience.

Lola: Since we both mostly work from home, it doesn’t change so much. But some of my projects were cancelled or postponed due to the lockdown, which created uncertainty and stress at the beginning. Now I feel more and more that it gives us the possibility to really dive into ourselves without much distraction. 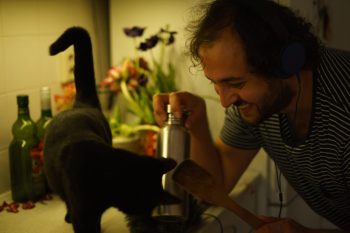 Do you experience the online environment as a good place to show your work and art?

Lola: There’s no one answer to this question. On the one hand I think the online environment is a good platform to get yourself out there and meet other creators working in similar fields who you wouldn’t have met outside of the internet. On the other hand I feel a lot of works are not experienced fully. We can’t create a complete immersive environment when people are looking at works on small smartphone screens. People might look at your video without sound. During our residency we shared our videos on IGTV, because that way we wouldn’t lose too much quality, but that also meant that after 15 seconds of viewing on your timeline the viewer is asked if they want to continue watching, which breaks the continuity and probably often stops people viewing the video altogether.

Can: With online presentation you have the opportunity to potentially get a lot more eyes on your work, but some works, especially in the performative and architectural realms will absolutely require a physical presence to experience it as intended. I am mostly interested in working with the moving image and sound so for me the online environment is a place I feel at home.

Are there any new things you have learned during this work process week that you feel are fruitful for future projects?

Can: So much! As this is my first residency experience there were a lot of new hurdles to cross, a lot of experimentation and problems to solve. From figuring out the basics of green screen and motion tracking to figuring out the quickest way to create our own soundscapes, there were a lot of technical things we had to learn during this very intense week. There was a fair amount of compromise to deal with, mainly due to the scope of the initial idea; the habitats turned out visually very different from how I first imagined and we also cut two of the intended habitat videos from the final presentation because of time constraints. We had to publish at least one of the videos with the motion tracking nowhere near as clean as we hoped… the list could go on. Yet because of these constraints, we learned to improvise with what we had at hand and ultimately created something we both feel close to. We also learned better ways to work with each other and were able to openly discuss every aspect of our interactions to really smooth out the creation process and our own communication issues. It was very therapeutic to say the least!

Lola: We learned many things! First of all we learned a lot about how we can work together as a team and also that sometimes it’s better to each focus on another part of the project. There were many things that both of us or one of us did for the first time and we learned a lot from each other. The last time I did video editing was years ago, so in the beginning of the week Can was doing most of that as well as the sound design and later in the week I could join into those processes a lot more. We wanted the work to reflect our individual qualities and aesthetic preferences and I think you can find these in the piece. I am excited to work on a new project without time limits and see where that will bring us. 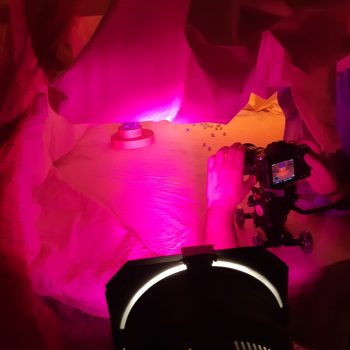 What are upcoming projects you will be working on?

Can: We are looking to continue working on shorter film and video-based projects together. Next to that I want to keep supporting Lola on her own projects, documenting them and helping her out as much as I can. I also have a film project that I have been developing that I hope to start production on.

Lola: Later in the year I will have two presentations. I will be showing my work “Who’s Afraid” (2017) in a new form at FLAM, a festival for live art in Amsterdam. It was first set to happen in June, but couldn’t because of the Corona measures, now it is planned for September. Then in October I am taking part in Social Aspects, organized by Derde Wal in Nijmegen, for which I will work on a new project related to public space.

Before I start those projects I would like to create another video work together with Can, probably in July. We have an idea which revolves around experimentation with cinematic language, narrative and abstraction. We are curious to see how that will take form and we are also looking for a place or platform to present it.

Have a look at ‘Habitats’ by Lola Bezemer & Can Oktik here on vimeo. 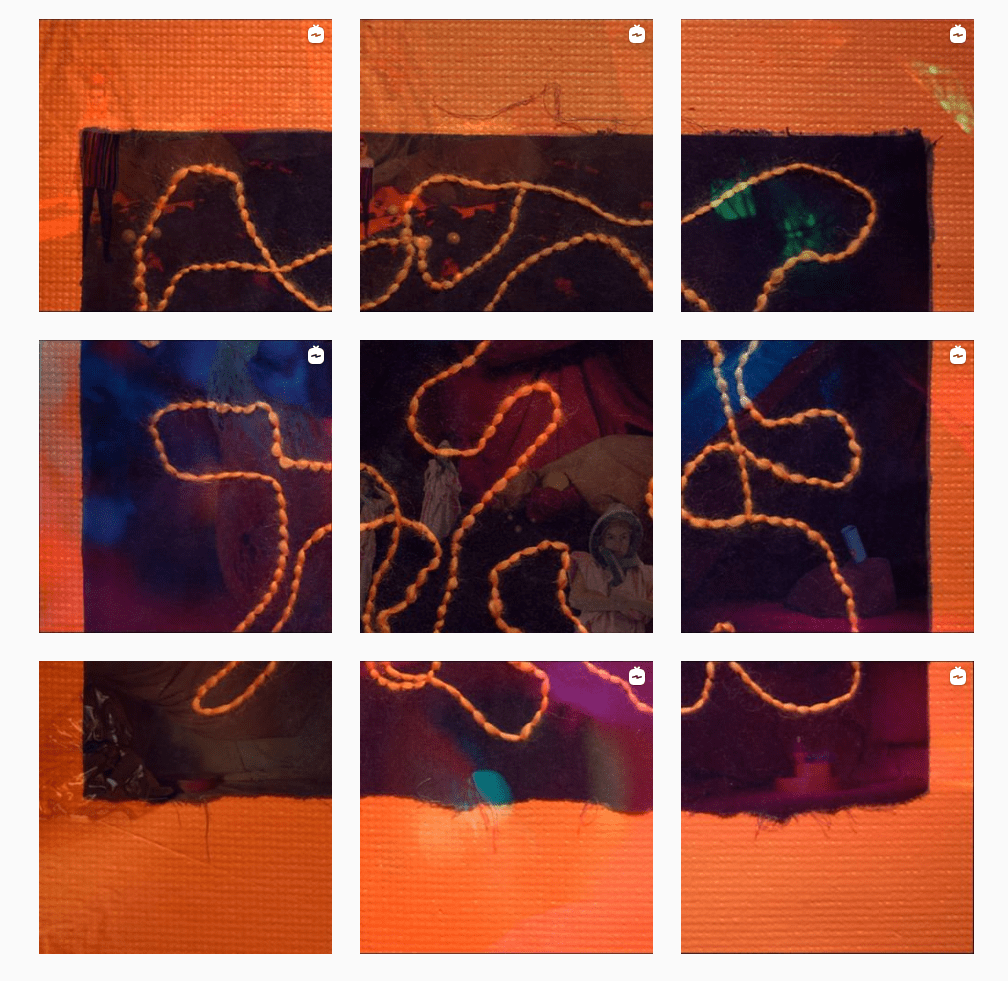